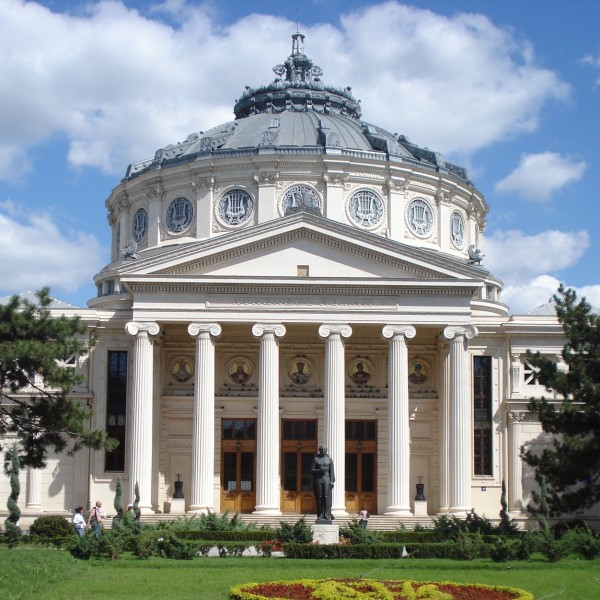 On this full day tour of Bucharest you will discover the city major attractions as the Palace of Parliament, the Village Museum or Bucharest Old Town.

We will pick you up from your location in Bucharest at the agreed time.

The first stop of our tour will be The Village Museum, located on the shores of the Herastrau Lake in the northern side of Bucharest. The exhibition includes some genuine monuments and old traditional houses, churches, water and wind mills, cloth mills, all of great historic and artistic value. The objects displayed inside the exhibited houses – as carpets, pottery, rugs, icons, furniture – are proof for the beauty and originality of the localÂ  folk art.

Next we take a panoramic tour of the most important sites and areas of the city such as: The Triumphant Arch, Victory Square, The Royal Palace (nowadays the seat of The National Art Museum – optional visit), Romanian Atheneum, Revolution Square, Victoriei Avenue, Union Square. We have the chance to admire the Parliament Palace, a “giant” built during the “golden age” of the communist totalitarian regime and the idea of a leader for whom the notion of “reasonable size” did not exist- Nicolae Ceausescu. The Guiness Book of World Records lists this building as the second largest administrative building in the world, due to its 330,000 sq.m. surface, after the Pentagon, and third place as regards to its 2,550,000 c.m. volume.

Close to the Parliament Palace is the Patriarchy Hill where we can visit the Mitropoliei Cathedral, the seat of the Orthodox Romanian Church. Next, a short walk to the Old Princely Court, the first local seat of residence, which was built during the rule of Vlad the Impaler in the 15th century. In the 16th century it was rebuilt completely, and later became the focal point of Bucharest, surrounded by houses of traders and craftsmen.
Returning to the Old District, we take a walking tour of Lipscani Street, Stavropolus Church, Manuc Inn, and more.

INFO! Bucharest is the capital and biggest city of Romania, with about 2 million people and plenty of great features that make it a charming tourist destination. Going back to the beginning of the 19th century, the Bucharest attractions combine interesting cultural sites with pleasant natural locations. From insightful museums to beautiful historical monuments, from the immense Parliament House tot the countless pubs of the Historical Centre and from the vibrant nightlife to beautiful parks and gardens, there are many things to see and do in a Bucharest sightseeing tour.